Inside: A Public and Private Life

An inscribed copy of Inside: A Public and Private Life by Joseph Califano to his former boss, Secretary of Defense Bob McNamara.

Octavo, x, 539pp. Illustrated paperback boards. Book appears unread. Inscription reads: “For Bob McNamara. With appreciation. Joe Califano.” Joseph Califano Jr. served as the deputy secretary of defense from 1964-1965, earning him the Defense Distinguished Service Medal. During the Carter Administration, Califano served as the secretary of health, education and welfare. Outside of government, he founded the National Center on Addiction and Substance Abuse at Columbia University. 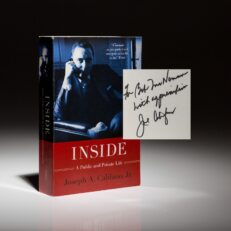