Into the Storm: A Study in Command (Association Copy) – with General Fred Franks, Jr. (Ret.)

First edition of Into the Storm: A Study in Command, signed by Tom Clancy and General Fred Franks.

Inscription by General Franks to Gordon R. Sullivan, a member of the Joint Chief of Staff and Chief of Staff of the Army. Inscription reads: “Gordon, With great respect for your forward looking leadership of our Army as 32d CSA. Many thanks for the continued opportunity to serve. I value our friendship. All the best. Fred Franks. Tom Clancy.” An exceptional association copy between two decorated United States army generals.

Comments: The recipient of this book, General Gordon R. Sullivan, served as the 32nd Chief of Staff of the Army and member of the Joint Chiefs of Staff. During his time as Chief of Staff of the Army, he oversaw the transition of the army from a Cold War posture to its current tactical state, which General Fred Frank mentions in his inscription. General Fred Franks Jr. is a retired Army General, who served in both Vietnam and the Gulf War. During the Gulf War, he commanded the VII Corps, which consisted of 146,000 soldiers and was primarily responsible for liberating Kuwait from Iraqi Republican Guards. 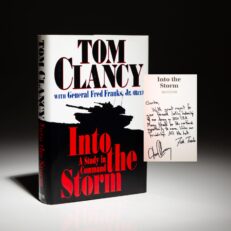