Jefferson’s Notes, On The State of Virginia

The first Baltimore issue of Jefferson’s Notes on the State of Virginia, printed in 1800 by W. Pechin, being the first American edition published outside of Philadelphia.

Notes on the State of Virginia was the only book published by Thomas Jefferson during his lifetime. The first version of this work was completed by Jefferson in 1781. It was privately printed in Paris in 1785, while Jefferson was serving as trade representative of the US Government to France. This initial printing was a limited run of 200 copies for friends and acquaintances. The book’s first public appearance in English was in 1787 when it was published by John Stockdale in London. The first American edition was published in Philadelphia in 1788 by Prichard and Hall. 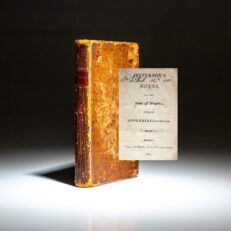