A scarce broadside, there are five other known copies, including an example at the Library of Congress and four other distinguished institutions.

Provenance: From the Camp Family Archive of Sackets Harbor, NY, with items relating to the first-generation settlers of Jefferson County, NY, from 1809-1866. The collection was amassed by Colonel Elisha Camp and his wife, Sophia Hale Camp, then held by the family for nine generations. Sold by Blanchard’s Auction Service in 2021.

The twelve incidents depicted in this broadside include: Harrison’s Humanity in War; Harrison’s Address to [Simon] Bolivar; Harrison’s Treatment of an Old Fellow Soldier; Harrison Prefering [sic] Another Man’s Son to His Own; Harrison’s Care for His Soldiers; Delivering the Eagle; Harrison Charging in Battle, at the Thames; Harrison’s Self-Denial; Harrison Giving Away His Only Blanket; Harrison Giving His Horse to a Methodist Minister; Harrison Saving the Life of a Negro; and The Council of Vincennes. William Henry Harrison (1773-1841) served as the governor of the Indiana Territory from 1801-1812. While governor, he negotiated numerous treaties with the native Americans in the area, greatly reducing their territory and stoking resentment against the United States. His antagonism culminated in the Battle of Tippecanoe in 1811 against the Shawnee Indians. This battle and the War of 1812 made Harrison a household name and propelled him to the White House in 1841. 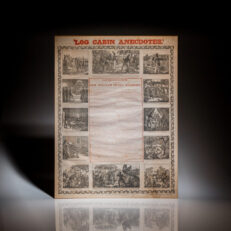