Letter written on nondescript stationery, previously folded, toning to leaves. The letter is addressed to a Mr. Jonathan Hollbrook of Boston, Mass. Full text reads: “Washington. March 11th, 1851. / Sir, I am in receipt of your letter of the 4th inst. desiring my influence to aid you in obtaining some situation under government. / I regret that it will be out of my power to comply with your request, as I have made it an invariable rule not to interfere in those appointments which the law has vested in other officers. / Yours Truly, Millard Fillmore.”

Millard Fillmore (1800-1874) served as President of the United States from 1850-1853. He assumed office in 1850, with the untimely death of President Zachary Taylor. The Whig Party did not nominate him as their candidate for the presidential election in 1852, but he ran for president in 1856 as a candidate for the Know Nothing Party and lost. 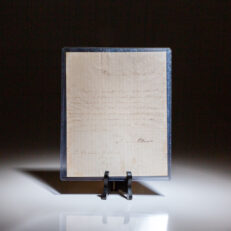