Octavo, [26pp]. Blue vellum covers, title in gilt on cover. Blue endpapers. Matching blue slipcase. This copy was personally dedicated to the Honorable Bryce Harlow, with his name appearing in gilt on the cover and dedication page. Signed by Postmaster General E.T. Klassen on dedication page. This piece was a gift from Postmaster General E.T. Klassen, with commemorative stamps of every president through Lyndon Johnson.

Bryce N. Harlow (1916 – 1987) was a veteran of Washington DC, serving as an administrative assistant, speechwriter and deputy assistant for congressional affairs in the Eisenhower Administration. During the campaign of 1960, he was a speechwriter for Vice President Nixon’s unsuccessful presidential campaign. With Nixon’s election in 1968, Harlow was the first presidential appointment of the new administration, serving as a congressional liaison. Harlow was awarded the Presidential Medal of Freedom in 1981 by President Ronald Reagan. He died in 1987. 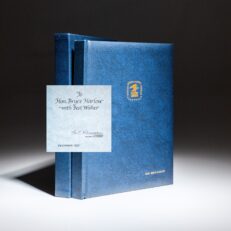