Octavo, 84pp. Beige paper boards over brown cloth, title printed on label affixed to front cover. Rubbing to boards, some wear to tips. Solid text block, free of any marks or notations. Obituary for Charles F. Adams affixed to front pastedown endpaper, resulting in toning to opposite page. Complete with numerous photographs, all with tissue cover. Signed on the front free endpaper: “Dr. Edmund Jennings Lee, With high regards of Charles F. Adams / Washington D.C. 12 II, 1910.” Dr. Edmund Jennings Lee (1853-1922) was a cousin of General Robert E. Lee and a great-grandson of Richard Henry Lee, a signer of the Declaration of Independence. 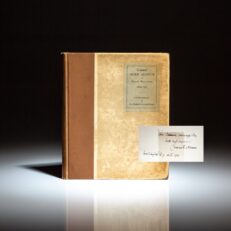