Kings Of The Hill

First edition of Kings of the Hill, signed by Dick Cheney and Lynne Cheney.

Often compared with Profiles in Courage by John Kennedy, Kings of the Hill follows the lives of influential House leaders from Henry Clay to Sam Rayburn. At the time of publication, Dick Cheney was serving in the House of Representatives, representing the state of Wyoming. He had previously served as White House Chief of Staff for President Gerald R. Ford. In 1989, he was called upon by newly elected President George H.W. Bush to serve as Secretary of Defense. In 2001, he was asked to serve as Vice President for George W. Bush. 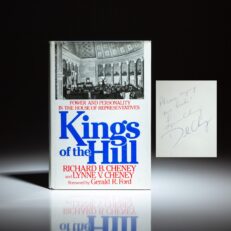