Otto Ernst Remer (1912-1997) was an unrepentant Nazi Wehrmacht officer during WWII, who was instrumental in stopping the July 20th, 1944 plot to assassinate Adolf Hitler. Shortly after the assassination attempt, Claus von Stauffenberg ordered Remer to arrest several top Nazi officials. When Remer went to see Joseph Goebbels to carry out the order, he was put on the phone with Hitler, who instructed him to arrest the conspirators. After the war, he was briefly arrested but returned to Germany to co-found the far right Socialist Reich Party. He was an influential figure in postwar neo-fascist politics and as such, a controversial figure. 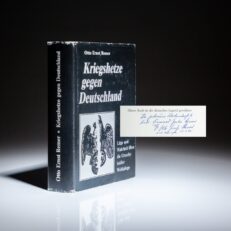