Life Studies Of The Great Army

Life Studies Of The Great Army by Edwin Forbes, the complete set.

Largo folio, [40 plates]. Publisher’s original cloth, title in gilt on front cover, rear board in cloth with light wear. Paste down on back panel of front board contains a “Descriptive Index” of all the illustrations. Complete set with 40 illustrated copper plate etchings. Occasional wear at edges of plates, toning to plate 1 but not carrying through to subsequent plates, bright otherwise. Housed in custom cloth folio clamshell case. The illustrator of the folio, Edwin Forbes, was known as a “Special Artist,” who carried his pad and paper onto the front lines of the Civil War conflict. This work by Forbes won him the gold medal at the Philadelphia Centennial Exposition in 1876.

Plate titles include the following: 1) The Reveille on the Line of Battle; Tattoo in Camp; 2) The Commissary’s Quarters in Winter Camp; 3) Through the Wilderness; 4) A Wagoner’s Shanty; A Deserted Pickethut; Mud Huts; 5) The Pontoon Bridges; 6): A Thirsty Crowd at The Old Spring House; Newspapers for the Army; 7) The Leader of the Herd; 8) A Rainy Day on Picket; Washing Day; 9) A Christmas Dinner; 10) A Slave Cabin; The Old Grist Mill; Sam; Got Any Pies for Sale Aunty?; 11) The Newspaper Correspondent; 12) Coffee Coolers; 13) Officers’ Winter Quarters; 14) A Scene on the Roadside Near Summer Camp; 15) Returning from Outpost Duty; 16) A Night March; 17) A Halt in the Line of Battle; 18) The Rear of the Column; 19) Stuck in The Mud, A Flank March Across Country During a Thunder Shower; 20) Fall in For Soup – Company Mess; 21) Going into Camp at Night; 22) On Picket; The Old Saw Mill; Waiting for something to turn up; 23) The Reliable Contraband; 24) Home Sweet Home; 25) The Distant Battle; 26) A Cavalry Charge; 27) A Hot Day; Beef Steak, Rare!; A Straggler; A Quiet Nibble On the Cavalry Skirmish Lines; A Cavalry Orderly Waiting Orders; 28) Newspapers in Camp; 29) A Watched Pot Never Boils; A Tasty Supper; Drummer Boys; Played Out; 30) Coming into the Lines; 31) The Supply Train; 32) “Gone off with the Yanks”; A Land Flowing with Milk and Honey; A Scouting Party; An Old Campaigner; 33) The Outer Picket Line, Winter; 34) A Lull in the Fight; 35) Traffic Between The Lines; 36) Going into Action; 37) An Advance of the Cavalry Skirmish Line; 38) Fording A River; Twenty Minutes Halt; 39) “Bummers”; 40) The Sanctuary. 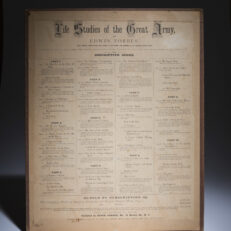