Signed copy of Lost Victory: A Firsthand Account of America’s Sixteen-Year Involvement in Vietnam, by former Director of the CIA, William Colby.

William Colby served as the Director of the Central Intelligence Agency from 1973 to 1976. He was replaced by future President George H.W. Bush in 1976, in a Ford Administration shakeup that became known as the Halloween Massacre. He wrote two books in his retirement, Lost Victory and Honorable Men: My Life in the CIA. 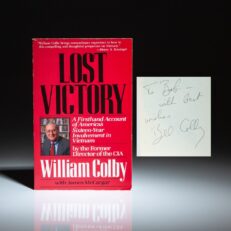