Octavo, [three volumes]. Illustrated softcover volumes, titles on spines. Mixed issue, with Book One being the second printing, subsequent volumes are later printings. Dampstain to lower corner of Book One, limited impact to text block, some discoloration to the signature page. Housed in the publisher’s custom slipcase, illustrated side panels. This copy is signed in Book One: “To Edward Perkins! Keep the faith, John Lewis.” Additional signature by Andrew Aydin.

John Lewis (1940-2020) served in the United States House of Representatives from 1987-2020, representing Georgia’s 5th Congressional District. He was a lifelong civil rights activist, helping to organize the March on Washington in 1963, and he led the first of three marches from Selma to Montgomery across the Edmund Pettus Bridge in 1965. He was awarded the Presidential Medal of Freedom in 2011. The recipient of this book, Dr. Edward J. Perkins (1928-2020) served as U.S. Ambassador to the United Nations, as well as Liberia, South Africa, and Australia throughout his 25-year foreign service career. In 1986 President Ronald Reagan appointed Perkins to serve as ambassador to South Africa in hopes of fending off a congressional override to his veto of economic sanctions against the country. It was a controversial decision amidst apartheid in South Africa, and many Black leaders urged Perkins to not take the role. Perkins accepted the position and served until 1989, one year before Nelson Mandela was released from prison. He was appointed U.N. Ambassador by George H. Bush in 1992, serving for one year. 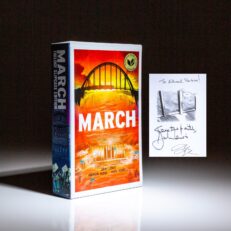