Limited edition of Memoir and Correspondence of Charles Steedman Rear Admiral, United States Navy, with a presentation inscription by the editor, Amos Lawrence Mason, and a laid-in signature of Admiral Steedman.

Octavo, xxi, 556pp. Blue cloth, title in gilt on spine. Top edge gilt. Light blemish to spine, likely from the removal of a private library sticker. No other evidence of being ex-library. A complete example, with numerous illustrations from the life and career of Steedman. Limitation page notes that 100 copies were printed, this being number 62. Presentation inscription by the editor and publisher, Dr. Amos Lawrence Mason of Harvard University, on the front free endpaper. With a clipped signature of Admiral Steedman loosely laid-in ahead of the title page. (Dr. Mason was Admiral Steedman’s son-in-law.) (Connor & Faulk 607)

Rear Admiral Charles Steedman (1811-1890) had a long naval career, first entering the U.S. Navy in 1828. He participated in the Mexican War, spent time at the Naval Observatory in Washington and saw service in the Civil War. During the Civil War, he initially worked in the Chesapeake Bay area, transporting troops between Havre de Grace and Annapolis. He was later given command of the Bienville and participated in the attack and capture of Port Royal in 1861, and then enforced the naval blockade of Georgia and Florida. Following the war, Steedman was promoted to Rear Admiral in 1871, and he retired in 1873. 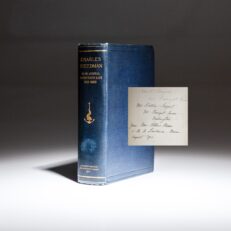