Message To The Senate of the United States

Signed by President Rutherford B. Hayes, a Message to the Senate regarding corruption at the New York Custom House.

The custom-house in New York collects more than two-thirds of all the customs revenues of the Government…The officers suspended by me are, and for several years have been, engaged in the active personal management of the party politics…They have made the custom-house a center of partisan political management. Beginning with an executive order on June 22, 1877, President Hayes prohibited civil servants from managing political parties or campaigns, angering fellow members of the Republican Party. This executive order was ignored by the influential New York Senator, Roscoe Conkling, who did nothing to reform the New York Custom House. Hayes attempted to replace the current collectors of the New York Custom House, including future President Chester A. Arthur, but he was blocked by the Senate. Hayes followed up with recess appointments in 1878 and with Democratic support, was able to replace the leadership with ardent reformers. After Hayes left office, the Pendleton Civil Service Reform Act of 1883 provided that federal government jobs be awarded based on merit, effectively eliminating political patronage. It was signed into law by President Chester A. Arthur. 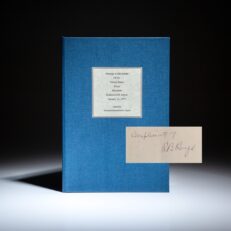 You're viewing: Message To The Senate of the United States $2,200.00
Add to cart