Second American edition of My Battle (Mein Kampf) by Adolf Hitler, in the publisher’s exceptionally scarce and controversial dust jacket.

Octavo, viii, 297pp. Light brown cloth, title printed in red on spine and front cover. Frontispiece portrait. Light soiling to cloth covers, bookseller’s label removed from front pastedown endpaper. Short borehole along lower edge of text block, no impact to text. Binding and hinges are sound. In the publisher’s dust jacket, $2.50 on front flap, large chip missing from spine, closed tears and light soiling to both panels, with the Dorothy Thompson blurb on the back panel. (Pastore, 204) An exceptionally scarce example of Mein Kampf, with the dust jacket eliciting a diplomatic protest from the German government.

This book is the second American edition of My Battle, after a controversial first print run in 1933 by the Houghton Mifflin Company. The first print run of 7,603 copies, priced at $3.00, met with moderate commercial success but elicited condemnation from Jewish American groups across the United States. By 1937, Houghton Mifflin decided to risk a second edition, with a retail price of $2.50 and a new dust jacket containing a provocative quote by columnist Dorothy Thompson on the back panel and illustrated with the colors of the Weimar Republic. The dust jacket resulted in a diplomatic protest from the German government, demanding that it be replaced with an approved design from the German publisher Eher Verlag, but Houghton Mifflin refused. 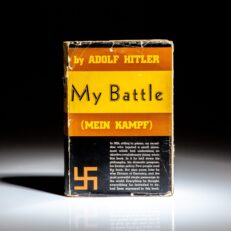