My Fifty Years of Chess

Signed limited edition of My Fifty Years of Chess by Frank J. Marshall.

Octavo, vi, 242pp. Red cloth, title printed in gold over black print on spine. Some light wear to cloth, rubbing along bottom edge of text block. In publisher’s scarce dust jacket, $3.00 retail price on front flap, some loss and sunning to spine, a very good example. From a limited edition of 500 signed copies, this being number 354.

Frank J. Marshall (1877 – 1944) was the US Chess Champion from 1909-1936. He is considered to be one of the best chess players of the 20th century. In this book he announced that Russian Tsar Nicholas II had declared him a Grandmaster, but there is some controversy about this designation. This book is Volume II in the Chess Classics Series, published by Horowitz and Harkness of New York. 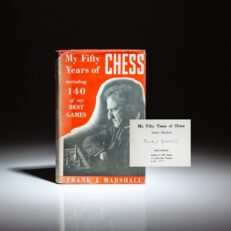