× Ask a Question re: Narrative Of The Earl Of Elgin’s Mission To China And Japan In The Years 1857, ’58, ’59
SKU: 12796 Categories: International Politics, New Inventory, Travel & Exploration

First edition of Narrative of the Earl of Elgin’s Mission to China and Japan by Laurence Oliphant.

James Bruce, 8th Earl of Elgin, served as High Commissioner and Plenipotentiary in China and the Far East, being sent there to help facilitate trade between this area and England. While there, he oversaw the end of the first phase of the Second Opium War with the signing of the British portion of the Treaty of Tianjin in 1858. He was accompanied on this mission by the author, Laurence Oliphant, who served as his private secretary. 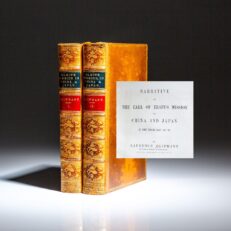