Present at the Creation

Presentation copy of Present at the Creation by Dean Acheson, inscribed to U.S. Ambassador to the United Nations, Edward J. Perkins.

Dr. Edward J. Perkins (1928-2020) served as U.S. Ambassador to the United Nations, as well as Liberia, South Africa, and Australia throughout his 25-year foreign service career. In 1986 President Ronald Reagan appointed Perkins to serve as ambassador to South Africa in hopes of fending off a congressional override to his veto of economic sanctions against the country. It was a controversial decision amidst apartheid in South Africa, and many Black leaders urged Perkins to not take the role. Perkins accepted the position and served until 1989, one year before Nelson Mandela was released from prison. He was appointed U.N. Ambassador by George H. Bush in 1992, serving for one year. The author of this book, Dean Acheson (1893-1971) served as Secretary of State for President Harry S. Truman. He was instrumental in defining foreign policy for the United States during the Cold War. Acheson’s memoir, Present at the Creation, won the Pulitzer Prize for history in 1970. 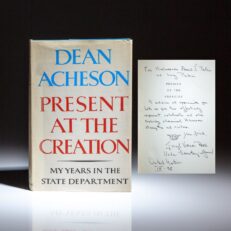