First edition of New Frontiers, signed by Henry A. Wallace.

Henry A. Wallace served as the 33rd Vice President of the United States alongside Franklin D. Roosevelt from 1941-1945. He was considered too liberal for party leaders going into the 1944 Democratic National Convention and was replaced by Harry S. Truman. This book, New Frontiers, was published by Wallace as he served as Secretary of Agriculture. He advocates for Roosevelt’s New Deal policies, noting that the public swing from conservative to liberal happens only once in generation and the nation should take advantage of the progressive public sentiment. 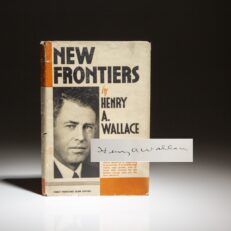