Framed and matted invitation, with 8″ x 10″ color image of President Nixon and his wife. Black wood frame with glass cover, measures 20″ x 12″. Not examined outside the frame. Signed by President Richard Nixon and Pat Nixon. From the estate of John E. Swearingen.

John E. Swearingen was the president of Standard Oil of Indiana and one of the most influential oil executives of the 20th century. When he became CEO in 1960, he deemed Indiana Standard Oil to be a “second-rate company.” Through aggressive research and oil exploration, Indiana Standard quickly became one of the most profitable companies in the United States. Swearingen was vocal about his dislike for federal regulators, often supporting Republicans who shared his views on limited government. In retirement, he was a close friend of presidents Gerald R. Ford and Richard Nixon. Swearingen died in 2007, survived by his wife, Bonnie Swearingen, who passed away in 2020. 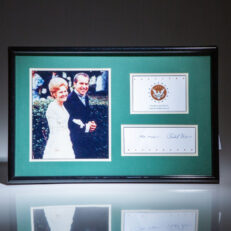