On Active Service In Peace And War

On Active Service in Peace and War by United States Secretary of War, Henry L. Stimson, inscribed to his friend, General William Lassiter.

Octavo, 698pp. Red cloth, title stamped on spine. Stated “first edition” on copyright page. Light toning to spine, some rubbing to cloth. In the publisher’s dust jacket, $5.00 on front flap, rubbing to tips of spine, some shelf wear, rare in this condition. Signed on the front free endpaper: “To Genl. William Lassiter – from his old friend, Henry L. Stimson.”

General William Lassiter (1867-1959) was a career military officer, serving in the Spanish-American War and WWI. In 1911 his longtime friend, Secretary of War Henry L. Stimson, asked Lassiter to draw up plans to reorganize the Army land forces. After distinguished service during WWI, Lassiter succeeded General Pershing as the President of the Tacna-Arica Arbitration Plebiscite Commission, negotiating a long-standing territorial dispute between Chile and Peru. Late in his career, he commanded the Philippine Department, before being replaced by General Douglas MacArthur. Retiring from the Army in 1931, Lassiter died in 1959 at the age of 91. 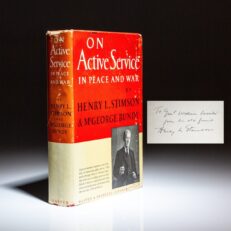 You're viewing: On Active Service In Peace And War $475.00
Add to cart