Once Upon a Time

× Ask a Question re: Once Upon a Time
SKU: 12812 Categories: Autobiography, Holiday Gifts, Influential Women

Signed first edition of Once Upon a Time by Gloria Vanderbilt.

Octavo, 301pp, [8]. Gray cloth, title in silver on spine. Stated “First Edition” on copyright page. Slight lean to text block, dust remnants to top edge, a near fine example. In the publisher’s dust jacket, $16.95 retail price on front flap, light sunning to spine, a touch of wear to corners, a very good example. Signed by the author on front flyleaf. This copy is signed by the author for The First Edition Circle at Kroch’s & Brentano’s of Chicago, with laid-in bookmark.

Gloria Vanderbilt (1924-2019) was the only child of railroad heir Reginald Claypoole Vanderbilt and his second wife Gloria Morgan Vanderbilt. Upon her father’s death in 1925, Gloria became the subject of an intense custody trial to earn control of both her and her trust fund. In adulthood, she became a noted artist and fashion designer. She was the mother of four children, including CNN news anchor Anderson Cooper. Gloria Vanderbilt died in 2019. 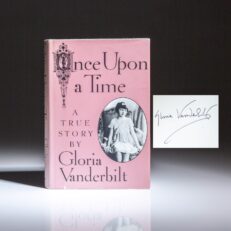