Inscribed to Chairman of the Joint Chiefs of Staff, General Colin Powell, first edition of Operation Just Cause by Thomas Donnelly.

Inscribed on the front free endpaper “14 January 1992 / To General Powell – With great respect. We tried to tell not only the commanders’ stories, but those of the grunts as well. Hope we’ve done you all justice. – Tom Donnelly.”

The invasion of Panama in 1989 was the first application of the Powell Doctrine, named for the new Chairman of the Joint Chiefs of Staff, which called for the use of overwhelming force and a clear objective before committing troops. In his autobiography, Powell states that “the reputation of the American armed forces was on the line” in Operation Just Cause. General Powell (1937-2021) served as the United States Secretary of State during the George W. Bush administration, the first African American to hold the post. He also served as National Security Advisor to President Ronald Reagan (1987-1989) and Chairman of the Joint Chiefs of Staff from 1989-1993. Powell was discussed as a possible Republican presidential contender in 1996 and 2000, but he declined to run both times. He passed away in 2021, survived by his wife of nearly 60 years, Alma Powell. 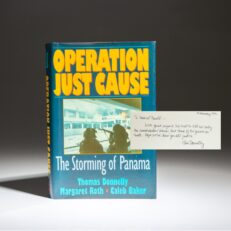