A handwritten note from First Lady Barbara Bush to Bob and Maddy Boilard, friends and fishing partners from Kennebunkport, Maine. The note is in response to a condolence card on the occasion of the death of President Bush’s mother, Dorothy Walker Bush. Mrs. Bush died shortly after President Bush lost reelection to President Clinton in 1992. The note is dated November 27, 1992 and written on “Walkers’ Point” stationary. Envelope is addressed by Barbara Bush.

Comments: Bob Boilard was a longtime friend and fishing partner of President George H.W. Bush. Mr. Boilard wrote that he never spoke about politics with President Bush, but kept topics to family, friends, fishing and Maine. In a letter to Bob Boilard featured in “All The Best, George Bush” dated 2/24/88, Vice President Bush says “Bob, I’m going to win, but Ill promise you one thing – it won’t affect our fishing together. Life is about friends and values. You are my friend. Keep your fingers crossed. George Bush.” 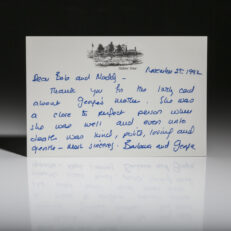 You're viewing: Personalized Letter: From First Lady Barbara Bush regarding the death of Dorothy Walker Bush $425.00
Add to cart