Signed photograph of President Gerald R. Ford and President-elect Jimmy Carter at the White House. This was taken on January 20th, 1977, shortly before the swearing-in ceremony for Jimmy Carter.

President Carter began his inaugural address: “For myself and for our Nation, I want to thank my predecessor for all he has done to heal our land.” While the relationship between Ford and Carter was rocky at first, they grew to be friends. Such good friends that Ford asked Carter to deliver his eulogy, which he did in 2007. 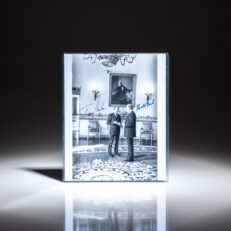