First edition of Seize The Moment, signed by President Richard Nixon, with letter to recipient.

Octavo, 322pp. Blue boards, blue cloth spine, gilt lettering on spine. Blue endpapers. First edition, first printing with full number line on copyright page. Occasional notes by the recipient of the book, with some passages underlined. In publisher’s near fine dust jacket, retail price on front flap. Signed on half title by Richard Nixon. Includes a note written on Richard Nixon stationery to the Honorable John Swearingen: “Dear John and Bonnie, I thought you might be interested in seeing some unconventional wisdom on foreign and domestic issues. Best wishes for the New Year, Sincerely, Dick.” 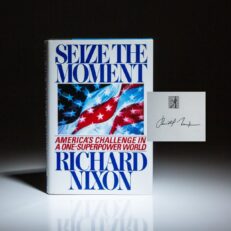