First edition of Special People by Julie Nixon Eisenhower, signed by the author. 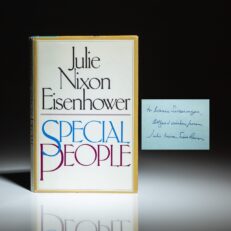