Signed letter from Senator Prescott Bush dated January 31, 1962, informing a constituent that he will “reinstitute restriction on the delivery of communist propaganda through the United States mails, and I am pleased to inform you that I have introduced legislation to bring this about.” Letter includes press release about this legislation. This 1962 statute was declared unconstitutional by the Supreme Court in Lamont v. Postmaster General, a landmark First Amendment case and the first time the Supreme Court struck down a federal law that was viewed as an abridgment of the First Amendment right to free speech. 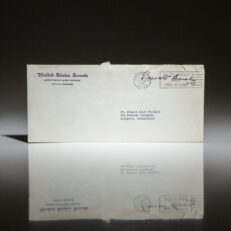