Signed photograph of Admiral Harold R. Stark off the coast of Normandy in June, 1944.

Photograph is monochromatic. Previously mounted, with remnants of tape on verso. Signed along the bottom edge of the front panel: “Harold R. Stark. Admiral US Navy.” Additional inscription in Stark’s hand on verso: “Off the Coast of Normandy. During the Invasion. June ’44. For Miss Virginia Howell. Cambridge, Ohio.”

Admiral Stark served as Chief of Naval Operations from 1939 until 1942, a few months after the Japanese attack on Pearl Harbor. As the war progressed, he was assigned to guide the naval buildup in the Atlantic, as Commander of United States Naval Forces Europe. He retired in 1946 and died in 1972. 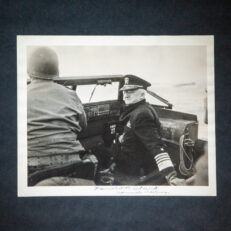