Photograph of President Lyndon Johnson and Lady Bird Johnson relaxing in a field of wildflowers, inscribed by President Johnson to the CEO of Standard Oil of Indiana, John E. Swearingen and his wife, Bonnie Swearingen.

Mounted color photograph, measures 14″ x 11″. Color photograph by White House photographer Mike Geissinger, taken April 13th, 1968 at the Haywood Ranch, near Kingsland, Texas. Faint rubbing to the signature by Johnson. Signed on the mount: “For Bonnie + John, We expect you to join us here. L.B.J.” 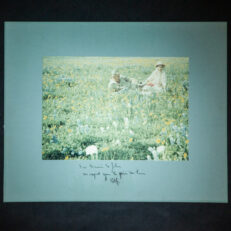