Signed White House photograph of President Ronald Reagan and Nancy Reagan, inscribed by both to the CEO of Standard Oil of Indiana, John E. Swearingen and his wife, Bonnie Swearingen.

Color photograph, measures 8″ x 10″. Stamped on verso as “Official White House Photograph,” with associated code. Previously framed, with residual tape along top edge of verso, not impacting the image or signature. Signed on the border below the image, with the inscription by Nancy Reagan and signed “Ron” by President Reagan: “To Bonnie and John – With our best wishes, Nancy + Ron.” 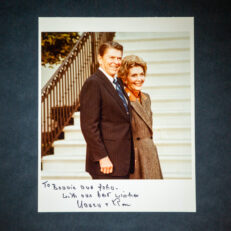 You're viewing: Signed Photograph of Ronald Reagan and Nancy Reagan $750.00
Add to cart