Mounted color photograph, measures 14″ x 11″. Light toning to the image and mount, previously framed. This portrait was taken at La Casa Pacifica in 1975. Signed on the mount: “To Bonnie + John Swearingen, With appreciation for their friendship over the years – from Richard Nixon. 1-20-80.” 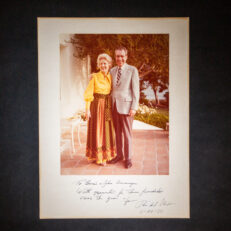