Color photograph with white border, measures 8″ x 10″. A few spots along left side, previously framed with tape remnants on verso. Dedication printed by hand with an added personal inscription by President George H.W. Bush: “To the Honorable Edward Perkins / with best wishes, and with great pride in your service to country. George Bush. May 12, ’92.” A unique signed piece, between a current and former Ambassador to the United Nations. 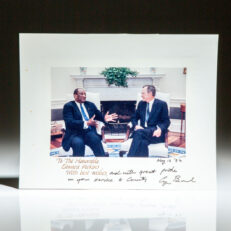