Wayne Huizenga (1937-2018) was the co-owner of Blockbuster Video at the time of this inscription. He was a close adviser to President George H.W. Bush and his son, President George W. Bush. Before his time with Blockbuster Video, he founded Waste Management Inc. and later through acquisition, AutoNation. He was the owner of several professional sports teams, including the Miami Dolphins, the Florida Panthers and the Florida Marlins. He died in 2018 of cancer. 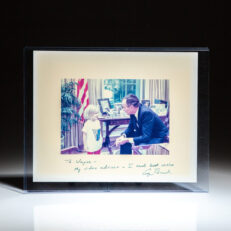