Measures 8″ x 10″. This photograph was taken in the Oval Office on September 12, 1976 by White House Photographer Karl Schumacher. Code B1467-24 written on verso. Originally purchased from RR Auction. A fine example.

After defeating Governor Ronald Reagan on the first ballot at the Republican National Convention, President Gerald R. Ford selected Kansas Senator Bob Dole as his running mate in 1976. In the future, Ford would say he regretted his decision to dump Nelson Rockefeller from the ticket, thinking it showed a lack of loyalty. Senator Bob Dole would go on to win the Republican nomination for president in 1996. 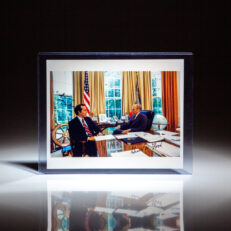