Comments: General George S. Patton, one of the United States’ greatest combat generals, led the Third Army during the decisive battles that followed the Allied Invasion of France in 1944. He was commander of the U.S. Seventh Army during operations in Africa and Italy. He died at the age of 60 in Germany, shortly after the conclusion of WWII. 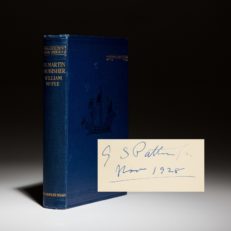