The second edition of So War Der U-Boot-Krieg by Harald Busch, signed by the head of the German Navy, Admiral Karl Dönitz, and German U-boat captain Adalbert Schnee. This work was translated into English in 1955, with the title U-boats at War.

Both signatories served in the Kriegsmarine (Nazi German Navy 1935-1945), with Admiral Karl Dönitz (1891-1980) serving as Commander-in-Chief of the Navy from 1943-1945. After the death of Adolf Hitler, Admiral Dönitz was the short-term German Head of State. Adalbert Schnee (1913-1982) was a corvette captain of the Kriegsmarine, commanding several U-boats during WWII. 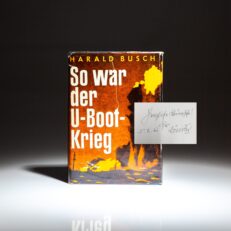