First edition of Soldier by Lieutenant Colonel Anthony Herbert, signed by the author.

This work by Lieutenant Colonel Anthony B. Herbert details his experiences in the Vietnam War, with specific emphasis on the war crimes he witnessed while in the service. He reported eight separate war crimes to his superiors, including execution, torture, looting and murder. His claims were challenged by the Pentagon and in the media. He died in 2014, with his obituaries largely crediting him as an honorable and credible army whistleblower. 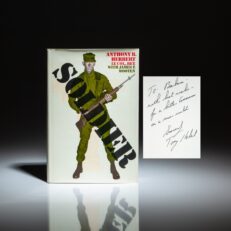