Photograph of Secretary of Defense Robert S. McNamara with Army General Paul L. Freeman, Jr., signed on the mount by McNamara with inscription.

Mounted color photograph, measures 14″ x 11″. Label from the Department of the Army on verso, giving details about the time and date of the photograph. Light wear to the mount, bumped front corner. Possible this was previously framed.

Inscribed on the bottom edge of the mount: “To General Freeman, a great soldier and an outstanding American, with admiration and best wishes. Robert S. McNamara.”

This photograph was taken August 2nd, 1963 in Stuttgart, Germany, at the arrival ceremony for Secretary McNamara. The Secretary was in West Germany to determine the readiness of United States forces to fight a conventional, limited war in Central Europe, assuming nuclear weapons were not in play. He was accompanied on the trip by General Maxwell Taylor, Chairman of the Joint Chiefs. At the time of this inspection, General Paul L. Freeman, Jr. was a four-star general, serving as Commander-in-Chief of the US Army in Europe. He retired in 1967 and died in 1988. 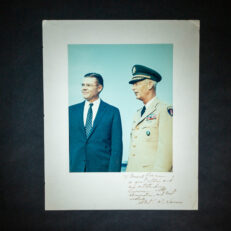