The Strength of Government

First edition of The Strength of Government by National Security Advisor McGeorge Bundy, inscribed to his landlord.

Octavo, xii, [2], 113pp. White cloth, title stamped in black and red on spine. A first edition, first printing, with no additional printings on the copyright page. Foxing along outer edge of text block, soiling to white cloth, generally clean text block. In the publisher’s near fine dust jacket, price clipped, bright illustrations. Inscribed on the half-title: “For Henry & Janet Redmond, Who may not agree with all this, so that they have my apologies in advance for their guilt-by-association in having had the past acknowledged on page x. Mac Bundy. November 20, 1968.”

In The Strength of Government, former National Security Advisor McGeorge Bundy argues that the national government is dangerously weak for the job assigned to it by the American people. He believes the rapid changes in communication and technology place an increased burden on the federal government that it is not equipped to handle. In the view of Bundy, the Executive Branch is dangerously weak, with certain departments being held together by “an administrator of truly exceptional force and skill.” McGeorge Bundy served as the National Security Advisor for Presidents John F. Kennedy and Lyndon Johnson from 1961-1966. Later in life, he joined Robert McNamara as a member of the “Gang of Four,” advising the Executive Branch on nuclear policy. Bundy died in 1996. 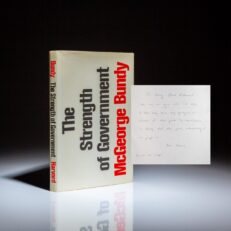 You're viewing: The Strength of Government $475.00
Add to cart