The Book Of Kings. A Royal Genealogy

Deluxe Limited Edition of The Book of Kings: A Royal Genealogy, signed by The Earl Mountbatten of Burma.

Small folio, [three volumes], xix, [1], 511pp [Vol. I]; [512]-1086pp [Vol. II]; 394pp [Vol. III]. Complete with 24 monochrome plates in Volume III. In publisher’s royal blue morocco covers, gilt titles on spines, raised bands, gilt decorations on covers. Light toning to spines. Silk endpapers, decorative gilt turn-ins. All edges gilt. Publisher’s red cloth slipcase, lined in velvet, royal crown stamped in gilt on sides. Bound by Zaehnsdorf of London for the publishers. This limited edition of 55 copies, of which 50 were offered for sale, was signed by Lord Mountbatten in Volume I. This is number 30 of 55. An incredibly attractive binding and presentation.

This book contains detailed descriptions of the family trees of western European nobility. The Earl Mountbatten of Burma was a British naval officer, uncle of Prince Philip, Duke of Edinburgh and the last Viceroy of India. He was killed in 1979 when his boat was bombed by the IRA, in an infamous act that soured relations between Britain and Ireland for many years. Mountbatten has found renewed fame in recent years as Uncle Dickie on the Netflix series The Crown. He is portrayed by Greg Wise. 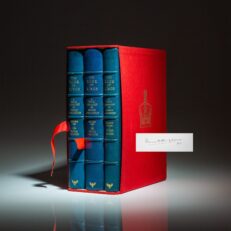