The Democracy Of The Constitution

First edition of The Democracy Of The Constitution by Senator Henry Cabot Lodge, inscribed to California Congressman, Julius Kahn.

Julius Kahn represented California’s 4th Congressional district from 1899-1903 and 1905-1924. He’s been described as “among the most influential Jews in San Francisco – as well as national-civic life” by the documentary American Jerusalem. He was a strong advocate of military preparedness leading up to World War I. He was also one of the authors of the Alien Exclusion Act, which prohibited immigration by Chinese nationals. His association with this act has tarnished his legacy in California politics. Kahn died in 1924 shortly after reelection. His wife, Florence Prag Kahn, took over his seat and held it until 1937. 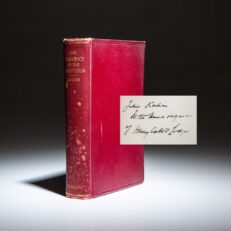 You're viewing: The Democracy Of The Constitution $350.00
Add to cart