Limited edition publication of The Dream by Winston S. Churchill, from the Churchill Literary Foundation.

Octavo, xvi, [4], 26, [2]. Red padded leather covers, embossed Marlborough arms on cover, title in gilt on spine. All edges gilt, silk endpapers. From a limited edition of 500 copies, this being number 474. Includes a letter from the International Churchill Society, thanking a patron for their contribution and describing this book. (Cohen A288.1)

This text is from a short article written by Churchill in 1947. At a family dinner in 1946, the daughter of Winston Churchill, Sarah, asked her father if he had the power to have anyone join them for dinner, who would it be? She expected him to name someone like Napoleon or Caesar, but he replied “Oh, my father, of course.” Churchill recorded this episode in an article simply titled “Private Article” and filed it away for many years. It was published by Sarah Churchill after his death in 1966 and later in this publication. 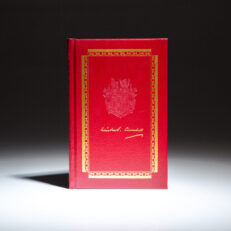