The Keystone Of Europe

Presentation copy of The Keystone of Europe: History of the Belgian Dynasty by Emile Cammaerts, to British Prime Minister Neville Chamberlain, from the Belgian Ambassador to the Court of St. James, Baron de Cartier de Marchienne, on the eve of World War II.

Following the heavy fighting of World War I, Belgium announced in 1936 that it would remain neutral if another war occurred in Europe. To honor this commitment, the Belgian military was reorganized strictly as a defensive force, while also investing in fortifications along the German border. When the United Kingdom declared war on Germany in September of 1939, Belgium began a rapid military buildup. They were conquered in the 18 Days’ Campaign in May of 1940, with a government operating in exile from Eaton Square, London until 1944. 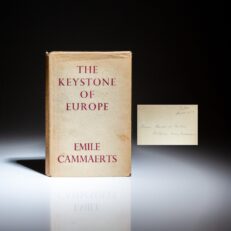