The First 100 Years! A Casual Chronicle of the Gridiron Club, inscribed by Robert D. Novak to Chief of Staff, Craig L. Fuller.

Octavo, 155pp. Title stamped in gilt on cover. Illustrated endpapers. Light rubbing to bottom edge of front board, a near fine example. Book is inscribed by syndicated columnist Robert D. Novak to Craig L. Fuller, then the Assistant to the President for Cabinet Affairs. Inscription reads: “To Craig Fuller, in memory of the 100th dinner! Robert D. Novak.” Includes an additional laid in note from Novak, apologizing that the book wasn’t at his table for the dinner, joking that “newsmen are not supposed to miss deadlines. Best, Bob.” 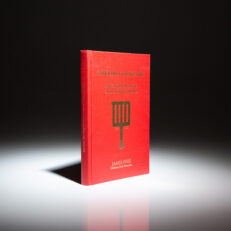