The “King” Requiem, a Mass in honor of the late Dr. Martin Luther King, Jr., held at the Second Baptist Church of Detroit in 1969.

Octavo, [22pp]. Paper covers with title and illustration on the front cover. Bound at the spine with staples, illustrations throughout. Rubbing to boards, dampstain to top right corner, light soiling from handling. Glossy white pages, two printed with gold foil. The event was heavily publicized around the greater Detroit area, with contributions from the Detroit Symphony Orchestra and conducted by James Frazier. The event was held at the Ford Auditorium, one of the largest indoor concert venues in Michigan. A scarce printing, with only one other known copy in OCLC. 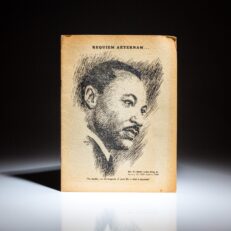