The Lives Of The Noble Grecians And Romanes

× Ask a Question re: The Lives Of The Noble Grecians And Romanes
SKU: 10625 Categories: Literature, Philosophy & Religion

The Lives of The Noble Grecians and Romanes, from the Shakespeare Head Press in Stratford-Upon-Avon and limited to 100 copies.

Octavo, [eight volumes], half black morocco over orange linen cloth. Title in gilt on spine, raised bands decorated with gilt ruled lines. Bookplate on front endpaper of each volume, with a dedication to the previous owner in Volume I. Light toning to leaf ends, not affecting text. Occasional wear to leather and linen, consistent with occasional handling. Top edge gilt on each volume. Bound by Morley of Oxford (stamped on the front pastedown of Volume I). This work was illustrated by Thomas Lowinsky, signed by him on the limitation page in Volume I. From a limited edition of 100 copies, this being number 18. An attractive set from the personal library of Dr. Pat Ireland Nixon, known as P.I. Nixon. He was a physician, historian, and book collector from Texas.

This work is a translation into English by Thomas North, from the French edition by Jacques Amyot. Thomas North has been called the “first master of English prose,” with his translations being used by Shakespeare for some of his plays. 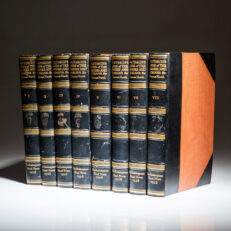 You're viewing: The Lives Of The Noble Grecians And Romanes $2,200.00
Add to cart