The Mutiny Of The Elsinore

× Ask a Question re: The Mutiny Of The Elsinore
SKU: 13087 Categories: Literature, New Inventory

First edition of The Mutiny of the Elsinore by Jack London, with a signed check from the author.

Octavo, 378pp, [6pp ads]. Original orange cloth, with an illustration of a ship on the ocean stamped on front cover in blue. Title in gilt on spine. With “Published September, 1914” on copyright page. Solid text block, small scratches to blue stamping on cover and spine, a near fine example. Vibrant frontispiece. A check drawn on the Merchants National Bank is affixed to front pastedown endpaper. Check is made out to Charles E. Lauriat for $17.45 and dated November 16, 1911, signed by the author on the signature line. (Sisson & Martens 78) (BAL 11956)

Jack London (1876-1916) was one of the first American authors to gain international fame and accumulate wealth from his writing. Despite his popularity, London never received any literary awards for his work. London is remembered today through retellings of his stories on film and television, most recently in a movie adaptation of The Call of the Wild starring Harrison Ford.Charles E. Lauriat, Jr. (1874-1937) survived the sinking of the Lusitania on May 7, 1915 and wrote The Lusitania’s Last Voyage (1915). The Lauriat family were booksellers in Boston, Massachusetts. 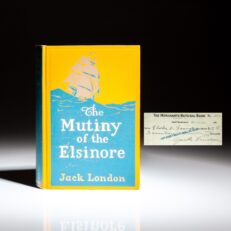