First edition of The Pawnbroker by Edward Lewis Wallant.

The Pawnbroker tells the story of a concentration camp survivor now living in East Harlem, New York. It was adapted into a film with the same name in 1964, being the first of its kind in the United States to focus on the Holocaust specifically from the survivor’s point of view. The movie was directed by Sidney Lumet and starred Rod Steiger, Geraldine Fitzgerald, and Brock Peters. 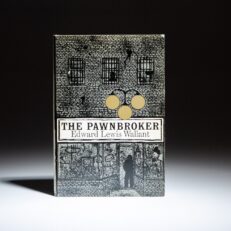