The People Of The Abyss

× Ask a Question re: The People Of The Abyss
SKU: 13093 Categories: Art & Architecture, Literature, New Inventory

Signed first edition of The People of the Abyss by Jack London, with an inscription to sculptor and poet Jeanie Spring Peet.

Octavo, xiii, [1], 319pp, [3pp ads]. Original blue cloth, title and border in black on front cover. Title in gilt on spine. Stated “Reprinted… June, 1904.” Solid text block, lightly bumped edges, some wear to gutters, a near fine example. Faint shelf wear. Complete with all 80 listed illustrations, including frontispiece. Signed by the author on the front free endpaper to “Jeanie Peet, the artist in Happiness, from one who would like to be one – Jack London / Oakland, Calif., August 25, 1904.” (Sisson & Martens 15-16) (BAL 11877) 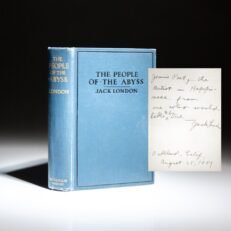